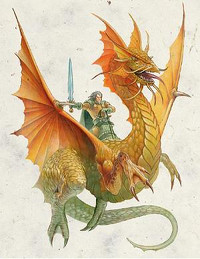 HOME: Torm lives in Celestia and is closely aligned with Ilmater, the God of Suffering in the service of Tyr, the God of Justice. His main concern is with the subjects of Toril, although he often spends time in discussion with St Cuthbert. From being a relatively obscure deity, Torm has risen through the ranks and is favoured by Tyr.
ETHOS: Torm is a warlike God who powerfully champions righteousness, honesty, loyalty and truth. His message to his followers is “Obey your masters with alert judgement and anticipation and stand ever alert against corruption. Honour your faith, your family, your masters and all good beings.”
SYMBOL: A metal gauntlet held upright with palm forward.
CLERGY: Torm’s clerics pray at dawn and the most powerful body are known collectively as the Order of the Golden Lion. These priests run temples throughout Faerun, helping the poor and the faithful and standing as proud beacons against evil cults.
TEMPLES: The temples are few but well spread out and all fortified so that they may also be used as places of refuge and fortification for their followers in times of trouble.
FAVOURED WEAPON: Greatsword or Longsword. Torm himself uses a greatsword called Duty’s Bond and will often be seen wielding this weapon on the back of a great dragon.
RITUAL: The ongoing aiding of other goodly faiths is known as The Penance of Duty and the two main Festival Days are the Day of Divine Death, a remembrance of victory over Bane, and the Day of True Resurrection, commemorating Torm returning from the Dead after a great sacrifice during the Godwars.
PORTFOLIO: Duty, Loyalty, Obedience, Paladins
DOMAINS: Good, Healing, Law, Protection, Strength
ALIGN: Lawful Good