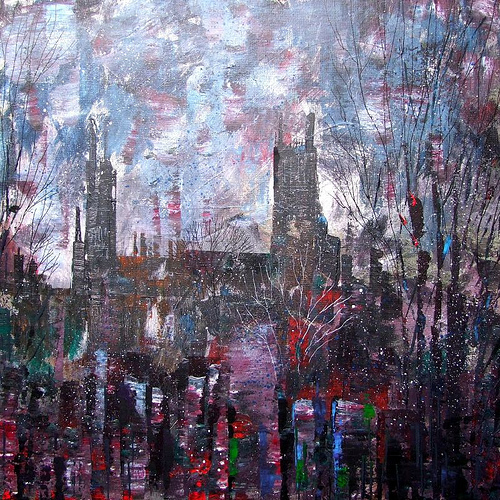 Lantan is the island home of Lord Jezrab Flinchal. There are three main towns on this small group of islands that worship Gond and generally shun arcane magic – Sundrah (to the north of the main island), Sambar (at the southern end of the same island) and Anchoril (situated on the southernmost island).

The Cathedral to Gond is based in Sundrah, presided over by the Archbishop of All Lantan, and served by the Bishop of Sundrah, but there are churches dedicated to Gond in all three cities, each one with a Bishop in residence. The gnomes and humans dwell together in harmony and are usually more introverted and introspective than mainland people. Other races are tolerated and most are warmly welcomed, as trade is important in Lantan, due to its geographical isolation from most of Faerun.

Gond (or Nebelun to the gnomes) is the lord of all smiths so it is no surprise that many of the inhabitants of these lands are specialist craftsmen, excelling in useful devices such as repairable wagon wheels, lamps that never go out, clockwork devices, castings, catches, locks and elaborate gizmos. Traders from all over Faerun therefore bring an abundance of raw materials to the lands to exchange for these goods.

The ruler of Lantan is Gnomeking Arnold of the Scragnose lineage. He is based in Sundrah and will not come into this story. He rules over all islands of Lantan through the co-operation of powerful Town Councils of the three major cities – Sundrah, Sambar and Anchoril, and where military intervention becomes necessary, this power is administered through Lord Commanders, one for each region. The Commander in Sambar is Lord St John Smythe, a human nobleman. However, unless war threatens, the Commanders allow the town councils to govern the country with the support of the established churches, predominantly Nebelun (Gond) and Mystra. Each Lord Commander is, however, a prominent member in the Town Council.

The most important structure in Sambar is the High Holy Crafthouse of Inspiration, a monument and museum to the industrious magnificence of Gond. Built over a thousand years ago by the Gnomeking Arrafas Scragnose, it was many years in the building and is an architectural masterpiece, as well as housing some of the most famous relics, devices and artifcacts ever used by gnomes throughout the world. It is rumoured that at the time of building it was blessed by Gond himself and there are Gnomish astrologers who prophesise that Gond will once again return to bless the Holy Crafthouse, an event that will be heralded by great light in the night sky.

Apart from the High Holy Crafthouse of Inspiration, which is situated on a small peninsular within the city walls, there is a busy harbour and marketplace, an assortment of inns, good general stores and even some churches to other Faerun deities, including Torm, Mystra, Tempus, Milil and Llira. There are also churches to Corellon Larethian, Karl Glittergold and Moridan.

The Church of Nebelun in Sambar is administered by Tigris Riverholme, Bishop of Sambar. He is an extremely powerful Cleric and is second only in position to the Archbishop, being also equal in status to the Bishops of Sundrah and Anchoril. Special dispensation for the governance and maintenance of the High Holy Crafthouse of Inspiration rests with High Priest Annadin Dextra, a devout disciple of Gond, but more of a beaurocrat than a clergyman.

Lord Flinchal’s cousin, Ahab Wrenchfree, is a highly influential aristocrat and dwells in a palacial mansion in the well to do area near to the museum.