Three exquisite intertwining chains of gold, silver and bronze that appear plaited without being attached.

Anyone wielding the Aspect of the Chains of Gond will notice that although they are NOT actually attached, they can never be separated. They are always eternally entwined and any attempt to separate them is futile as they always tangle themselves up into plaited existence. Use of tools to faciliate separation will result in the tools being disintegrated – SO PLEASE DO NOT USE MAGICAL ITEMS!

The intertwined chains were first picked up by Pelius when he entered the Portal that opened up at the Anniversary Feast of Shimring in the house (Next to the Green Dragon Inn) hired by the Questors.

At that time they were draped across a stone statue of a prone Elven Prince in a dark chamber. Several diminutive forms cried with great urgency for the mighty cleric to take the chains and return through the portal, which he did.

Detect Magic cast on the chains revealed an “ever so faint” magical aura but no other properties could be determined. Pelius took ownership of the chains as the party continued on their quest into Wyrmland.

After the acquisition of the Heart of the Dracolich, the Exarch of Bahamut told the party that the chains were aspects of the Chains of Gond and that the main task of the party was to find the actual chains. These had been stolen by the evil god, Iuz and only he knew that Eillistraee had taken them from him while she was still in Gossamer.

When the Questors entered the Room of Dark Seclusion in the Primordial Temple of Savandem, cojoined to Gossamer in the Demonweb, and the Chains covering Vhaeraun were lifted by Pelius (past) and taken into Sigil, the power of the Artifact was transferred to the Aspect chains wielded by Pelius (present).

The Chains presently carried are the actual artifact forged by Gond over 5000 years ago but they have still to be fully enabled. Their ancient history is not well known but it is obvious that the chains have power over other deities.

Influence on Primordial Powers:
Even in their disabled state, the CHAINS OF GOND repel all medium and lesser Primordial Powers. This prevents any of these powers attacking the wielders of the HEART OF THE DRACOLICH through the Primordial Power membranes surrounding the Temples of Shimring. The chains do not function in this way with GREATER powers, but since those powers are “imprisoned” this is not relevant to play within this campaign.

PROPERTIES OF THE CHAINS OF GOND 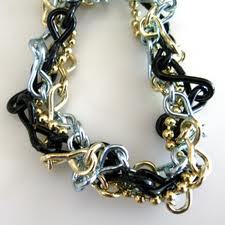