Cleaning out the fireplace. 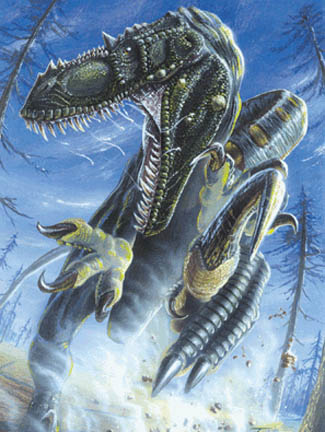 The Questors enter confidently into the dark room, filling it with light from Pelius’s spell. Jezrab has determined the position of the portal but it is not an easy passage, because a Protean Scourge has made its hiding place here, totally unaware of the new portal position. As the characters move towards it, it decides to protect itself by attacking first. On the first damage done to the creature by the Questors, it splits into two distinct beings and attempts to use its spellcasting abilities. These not being the most successful, it has to opt for physical combat. The Scourge puts up a good fight, seriously wounding some and bringing Falek Grange to the point of unconsciousness. But these foes are Holy Questors of a might not yet experienced by the Scourge, and in the end he is killed and his magical scythe taken.

Jezrab Flinchal leads the party through the portal, and divine inspiration washes over them as they enter a new world. Falek Grange, touched by the wisdom of Mystra, is made aware that the party is now entering a world where their souls cannot be reached by their own Gods.

The climate of Wyrmland is hot and cloudy, the vegetation different to most other lands seen by the Questors. A cacophany of loud shrieks, cries, squawks and howls fills their ears and they are unsure which way to travel. Shou Garner casts a Fly spell on Zahariel and he ascends 200’ into the air, noticing mountains to the north, swamp to the west, a river to the east and a large lake with an island to the sounth. At the tip of the lake, where a river joins the body of water, Zahariel notices what seems to be a humanoid village.

The Questors make their way to this place, being as careful as they can not to engage with any of the strange creatures that are obviously moving around in the vegetation on all sides of them. What they do not know is that they are being hunted by Megaraptors, who attack from the rear, two of them making off with Sir Keoghen’s horse and pony. The remainder are destroyed by the party, who are able to make their way to the village of Denn, negotiate entry and begin to converse with the Shamanic Chieftain, Imbamo Bama

A Prophecy, A Skirmish and a Spot of Shopping

The party start out early by visiting the Tower of the Prophet and the Celestial Eye. Shou Garner does not go due to a serious tummy bug. At the Tower, the party meet Hound Archon Humbart and are given the scroll of the Celestial Eye. Humbart introduces Sir Keoghen to the service of the party. When they arrive back home they realise that Zahariel has not been with them and that an imposter has been in their midst. At this time there is a knock on the door and the sorcerer Tippit introduces himself and offers his service. The party accept and then try to trace the point where the imposter left them. However, all trails lead to a deadend.

They are then bothered by an insulting youth, two slimy Mezzoloths and Sergeant Crossley of the Sons of Mercy. Conflict is avoided and the party carry on their way collecting information. In the evening on their way back from trans-city wandering, they hear a cry for help and find a Githzerai, looking very much like Rule-of-Three being attacked. One of the Githyanki warriors warns them to stand down, but they pay no heed and head into the fray.

A githyanki warlock casts a wall of force behind Zahariel and appears on the steps ahead. One githyanki warrior appears next to Jezrab and cuts him with a fiery sword, but Jezrab uses an old jaunter trick and supplants himself with Keoghen. Out on his own, the lone githyanki warrior is cut down while Zahariel dispatches another and moves swiftly to deal with the warlock. But just when more death seems imminent a parley is made and one warrior and the warlock take off with their companions’s swords. The wounded Githzerai turns out not be Rule-of-Three, but Killiyak Gurettna, a wizard living in the Hive. By way of thanks he invites them all home, and gives them a Passwall scroll.

Pleasant sleep is not interrupted by dreams this night and when the party wake up, they do some serious shopping before returning to the library, where they are told that the portal to Wyrmland is to be found in they Githyanki quarter of Gitriban in the Guildhall Ward. They make their way there forthwith.

Many Meetings and a Feast of Surprises Zahariel, Pelius and Grunthy make the long awaited trip to Sigil, meeting a new companion (Falek Grange), at the portal, now warded by Taern Hornblade’s soldiers. Shou Garner travels through a portal and bumps into Jezrab Flinchal. Together, they search for Zahariel. All adventurers meet at the Green Dragon Inn in the Lower Ward and get off to a great start, with Zahariel inviting Sugar and Jezrab to the house that has been secured for them by Merrick Johnson.

They all enter a competition at the Styx Oarsmen – a roudy game of “Demon Pit” with the Prize, a coveted True Resurrection Spell. Unfortunately, this is won by a greedy Mezzoloth, who dances into the night and teleports away. There is violence in the bar, with at least two demons slain by the Marilith barmaid. The party retire to their house next door to the Green Dragon Inn, where they sleep soundly and wake early, all having had vivid dreams. They discuss these over breakfast and there seem to be common themes – chains, gifts and windows of opportunity.

A knock at the door turns out to be two troublesome Vrocks. They attack the party but are themselves destroyed. Unfortunately, an innocent halfling is killed. Prayers are said, a funeral is arranged, but the feast must continue – not where it was intended. The hired hall has mysteriously burned down so the party decide to hold the feast at home. Merrick Johnson provides the catering and the butler is so busy, nobody even notices he is there. Two dabus stand guard at the entrance and one of them utters something to them – a message from the Lady perhaps, of a window of opportunity.

During the feast a dark portal opens in the room. Pelius is first to jump in. He sees a statue of an elf on a pedestal with three chains draped over the statue – gold, silver and bronze. Several diminutive figures in the light source urge him to take the chains and flee! Sugar tries to help but the tiny figures urge her to leave them be and save herself. No sooner than Sugar steps back into the room does the portal disappear!

In the summer of 1374 Silverymoon in Faerun was under threat from the servants of Lolth. It became known that Lolth’s high priestess, Eclavdra Eilserv, was preparing to attack the Silver Marshes by using Lolth’s power to draw a portion of the land, including the City of Silverymoon, into the Demonweb.

A small party was sent by Lady Alustriel to investigate and if possible foil these plans. They destroyed the magic image of Silverymoon in the Fane of Eclavdra but, while they were adventuring, heard of a much more far reaching threat being hatched whereby a Council of Demons was to be signed and bound by the Divine Spark of Lolth. How the party thwarted this plot can be read about in the summary Previous expedition to the Demonweb Pits .

Surviving members of the party were all honoured by Queen Alustriel and given lands and titles near to Silverymoon. The expedition, based in Sigil, was such a monumental event that the group vowed that in 10 years time they would all return to Sigil to celebrate and to honour the Tower of the Prophet where they first received Divine Guidance.