At the time of the Shimring Quest, Khelias Darkwhynde dwells in the Citadel of the Dead, guarding the Tower of the Orb of Celierre and replenishing the undead drow warriors of Eillistraee, defiled by Lolth and now patrolling Gossamer. His two main servants are Shakira the Vampire Mage and two demons, a Marilith in charge of the armoury and a Shadow Demon to help guard against possible attack by Lich Deriath Fogbane.
The Marilith was destroyed by the Shimring Questors when they attacked the Armoury.

For hundreds of years, Khelias Darkwhynde has experimented with various forms of necromancy and, with the help of his mistress Lolth, has developed a new strain of undead creature, the Malcurate, or antipriest – a shadow-like creature that exudes an aura of antiturning and confers wisdom damage with its touch. He has only been able to make two of these creatures and he keeps them close in preparation against any attack by good clerics. 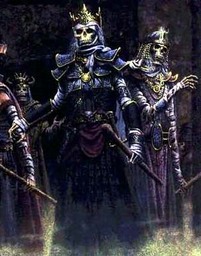