At the time of the Shimring Quest, Deriath Fogbane dwells in his Tower at the Ravine of the Other Side, a magically twinned place that requires entrance from the opposite side of a ravine unless entered through the Shadow Rift created by Primordial Chaos and utilised by Deriath to infiltrate Gossamer. Unlike the other two liches, he is not aligned with any of the Dark Elven pantheon and he was drawn to Gossamer by rumour of what was hidden in the Room of Dark Seclusion.

He keeps a small guard of Greater Shadows and Shadow Demons around him, but the majority of his entourage is engaged within the Shadow Realm itself, protecting entrances to his tower and looking for clues to the Key that he seeks.
Deriath Fogbane was destroyed by the Shimring Questors before he could ever discover his folly – that the Room of Dark Seclusion held no treasure that he could ever use. 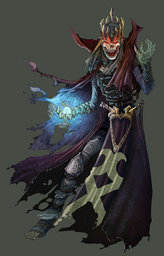