High Priest of Nebelun, Officiate of the High Holy Crafthouse of Inspiration

Annadin Dextra is a gnome of rather severe appearance, with a squinty eye that he has to cover with a special gnomish lens to be able to read. At other times he wears this lens pulled onto his head and held in place with an elasticated leather strap. He is balding on his forehead, has rather pointy ears and a continually stern expression.

He is always meticulously dressed in his robes of office and will often be seen either in the High Holy Crafthouse of Inspiration or in well-to-do parts of the city rather than his official residence in the Church of Nebelun to the North of the City.

He is not a great believer in rumour and superstition but believes unflinchingly that he knows Gond’s true will and that the will of Gond, or Nebelun as he is known to the Gnomes, is that Annadin Dextra guard the relics in the Holy Museum with all his might and strength.

He wears no armour and is usually armed with books and records, rather than weapons.

High Priest Annadin Dextra is Officiate of the High Holy Crafthouse of Inspiration and is based in the Church of Nebelun in Sambar. He loyally serves the Bishop of Sambar, and has a high rank within the Church due to his special dispensation as Officiate of the High Holy Crafthouse. However, because of this he is also much more of a beaurocrat than a clergyman and spends the bulk of his time not attending to the spiritual needs of the community but to the physical maintenance and smooth running administration of the Lantan island’s most famous landmark.

He knows the layout of the museum better than most people in the city and is constantly hobnobbing with the upper classes and wealthy merchants in his neverending pursuit of maintenance, care and stocking of his beloved building. 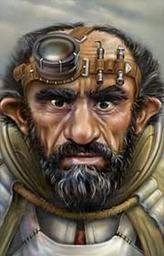