At the time of the Shimring Quest, Amathus Wendyll is based as a guardian in the throne room antechamber to the Room of Dark Seclusion. He has made a deal with Eillistraee and for the last few hundred years has dedicated himself to her cause in return for promised redemption and rescuing from the utter destruction of Gossamer.

He guards the chamber that can only be entered through a hallway of antimagic, which he can see from his position as a permanently projected image. If anyone enters this chamber he will shout out that no spells may be cast on pain of death. He has readied a powerful time reversal spell that will send any offenders back in time and place and allow him to array further spells. As he has had hundreds of years to prepare, almost nothing can bypass him. The only creatures he will allow to pass are those carrying the Shadow-Phased Key to the Room of Dark Seclusion, hidden by Eillistraee in the tower of Deriath Fogbane. 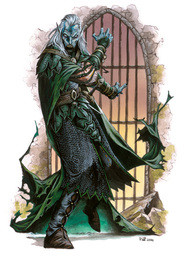